I took this tour many years ago.  It might have a changed a bit since then, but the overall experience is the same.

After downing a quick New York breakfast of bacon, eggs, and coffee at a nearby coffee shop, we dash around the corner to the meeting spot for our bike tour of Central Park.  There we meet Sebastien, a young Frenchman who has lived here about six months and is our guide.  (Someone told me that in NYC, where everyone is from some other place, anyone who stays a year is an official New Yorker.)  Sebastien sits on a folding chair by Columbus Circle, which is roaring with traffic, and calmly smokes a pipe  as his group--which includes just my husband and me and two stewardesses from Belgium--gathers. 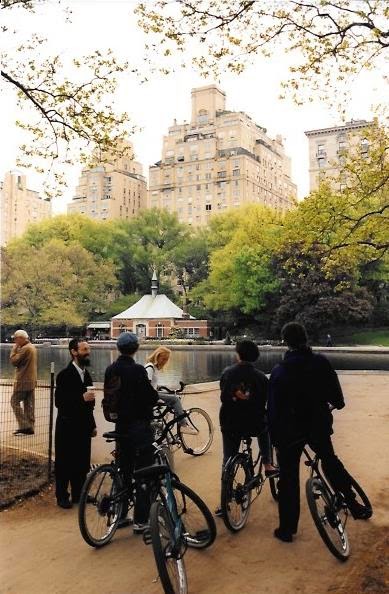 After picking up our bikes from a nearby underground garage, we peddle off into lush, green Central Park.  Completely man-made, the park dates back to 1857.  At that time it was literally a pig sty and was described by a journalist of the times as a “pestilential spot where miasmatic odors taint every breath of air.” The founding idea was to build a municipal park where poorer residents could escape for a time the squalidness of city life.  Frederick Law Olmsted--who later consulted on San Francisco’s Golden Gate Park, which was patterned after Central Park--was appointed chief architect of the park’s design.  Now the park is home to more than 180 species of bird and is particularly pleasant for biking because it is closed to traffic daily from 10 a.m. to 3 p.m. and 7 to 10 p.m. and all day on weekends.

We stop at various locations--the Gothic dairy building, where cows were kept until the turn of the century; the Conservatory Water pond, where model yachts race on summer Saturdays (we purchase drinks here and sit for a while, chatting, while pigeons accurately target us from above); Strawberry Fields, a teardrop-shaped grove maintained by Yoko Ono in memory of her assassinated husband, John Lennon.  Along the way, Sebastien points out architecturally impressive penthouses occupied by Al Pacino, Woody Allen, and Madonna.  We ride around the Reservoir, then park our bikes at the Shakespeare Garden and follow a path leading to Belvedere Castle--a model of a Scottish castle now serving as a children’s learning center.

Throughout our route we are sharing the paths with in-line skaters, walkers, moms and dads pushing strollers, and even a film crew.  For almost as far as we can see it is green grass and trees, punctuated with color by assorted blooming flowers.

A major embellishment to this tour is running into David.  A Hassidic Jew, he is dressed traditionally in black and sports the distinctive sideburn locks of the sect.  He initiates conversation when we stop and wants to know where we are all from and what we are doing.  When I ask him what his name is, he answers, “Peace.  Love.  Yellow.  Rainbow.  Water.  Full.  I want to feel full.”  Baffled, we all look at each other, thinking he is probably another sad victim of city life.  But just in time he cheerfully continues, “My other name is David.” He seems genuinely interested when I tell him my son’s name is also David.   We continue chatting with him, learning that he is retired from the diamond business and now is just taking life easy, hanging out in the park and meeting new people.  We pedal on, chalking up David as one of those inexplicable characters who give New York its, well, character.

Sebastien says the actual tour route varies with the group.  “Germans like to go and not stop,” he says.  “For elderly people and kids, we slow it down.  It’s o.k.  We wait for them.”

Later, when we tell some resident New Yorker friends about this tour, they are very interested and want to take it, too.  I suggest they just rent some bikes since they know the park, but they say they rarely spend time in Central Park and that we actually know more about it now than they do.  They want the tour guide, too.
Central Park Bike Tours, 203 W. 58th St., 212-541-8759


More things to do in NYC.