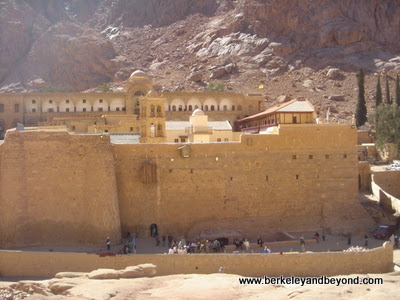 Built in the 6th century by Byzantine Emperor Justinian I, this is the oldest continuously functioning Christian monastery and the smallest diocese in the world.  It is a UNESCO World Heritage Site, and at an area high point at 5,000 feet is reached via a pass through jagged mountains and desolate terrain in the White Desert near the Israel border.  This area was annexed in the 1973 war between Egypt and Israel.  My tour made a pit stop at the “Jewish area,” where a latte cost $4 and the restroom charge was 40 cents.  Scenery includes scattered rocks, windblown trash, and the occasional thorn tree--camels love to nibble at them--and Bedouin encampment. 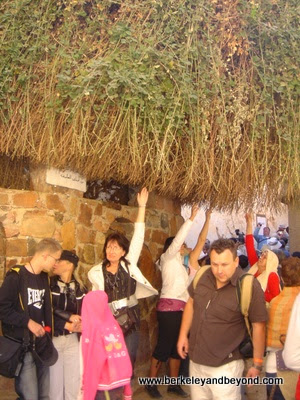 Home to a community of Greek Orthodox monks who guard the compound and operate a nearby guesthouse and restaurant, the monastery is built around the Chapel of the Burning Bush, which dates to the 4th century A.D. and is said to be built on the site of the original biblical burning bush.  Tradition says that the bush growing here today is the very one from which God spoke to Moses.  The Church of St. Catherine/Basilica of the Transfiguration holds a small sampling of the monastery's icons as well as one of the best preserved Byzantine mosaics in the world (it is located over the apse).  Monastery must-sees include a collection of ancient paintings and art, and a museum of holy relics and icons that holds the world’s largest and oldest collection of Byzantine icons. 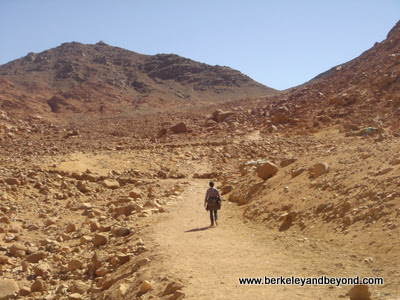 If you’d like to climb Mt. Sinai to see the spectacular view and sunrise, you can take a tour or do it on your own.  Plan to depart on the trail by St. Catherine's no later than 2 a.m., and take a flashlight and batteries plus water and a snack.  Riding a camel for the first part of the trip up to Elijah's basin is worth consideration (they are for hire just outside the walls of St. Catherine's); then later you can walk down, which is easier in daylight.  It is cold in the desert at night, so bring heavy clothing even in August.

Posted by Carole Terwilliger Meyers at 10:21 AM