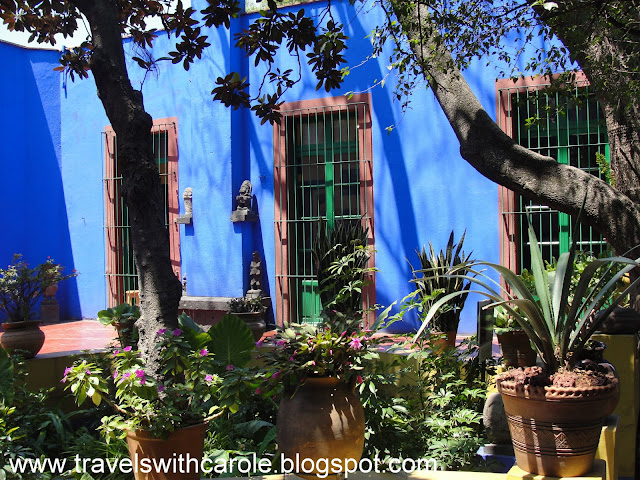 Frida Kahlo was born on July 7, 1910 in Casa Azul, the cornflower-blue house that is now her namesake museum.  She grew up here and later lived here with husband Diego Rivera from 1929 until she died in 1954.  Kahlo spent her life in physical pain--first from polio contracted when she was 6, and then from a streetcar accident that pierced her spine when she was 18—and life with her husband was both passionate and tumultuous.

Though during her lifetime she was best known as the wife of muralist Diego Rivera, today Frida Kahlo is probably more famous for her own art--striking images and self-portraits into which she painted her pain.  Some rooms in this house museum are used as galleries and display a small collection of Kahlo’s work as well as paintings by artists she admired.  Others are preserved as they were when she died, providing a peek into the domestic life of these two famous artists.  I especially enjoyed viewing the tiny clay Tequila-tasting cups hanging on the kitchen wall and spelling out “Diego and Frida.”  Her wheelchair remains in her studio next to an easel holding a partially completed painting, and paint brushes, books, and photographs are scattered about.  Here and there are examples of her colorful traditional clothing and the pre-Columbian art and terracotta figures from Teotihuacán and Tlatelolco that the couple collected.

It is interesting to note that Trotsky also lived in the house for a while, and that much of the 2002 movie “Frida,” starring Salma Hayek in the title role, was filmed here.

Outside, a spacious garden planted with green ferns and blooming flowers looks particularly brilliant against the deep blue walls.  It holds a mock temple Kahlo had built to display some of her pots and statues as well as several skulls from Chichén Itzá.  A small garden cafe serves light refreshments, and an adjacent gift shop purveys relevant books and souvenirs.

More things to do in Mexico City.

More ideas for travel adventures in California and the U.S. and around the world.
image c2013 Carole Terwilliger Meyers